VOICE Summit started a little later today. Attendees trickle onto the main floor, taking advantage of the empty stage to snap a few selfies in front of the large letters spelling "VOICE".

Nearing 9 AM, Pete Erickson and James Poulter run on-stage with a VOICE water bottle and Cathy Pearl's book, nudging attendees to visit the pop-up shop and snatch up the remaining merchandise. As a final bribe, Poulter announces that a new mystery box awaits with a golden ticket to VOICE 2020.

After the initial promotion, Pete takes over to outline the featured sessions of the day and remind attendees that the closing keynote will take place on the main floor. He also mentions the raffle which each attendee entered the moment they checked in. A few attendees check their badges, making sure their raffle ticket still sits in its plastic wallet.

"Shall we get the party started today?" Pete before launching into a description of the upcoming panel featuring key Fintech Leaders, moderated by Brett Kinsella. 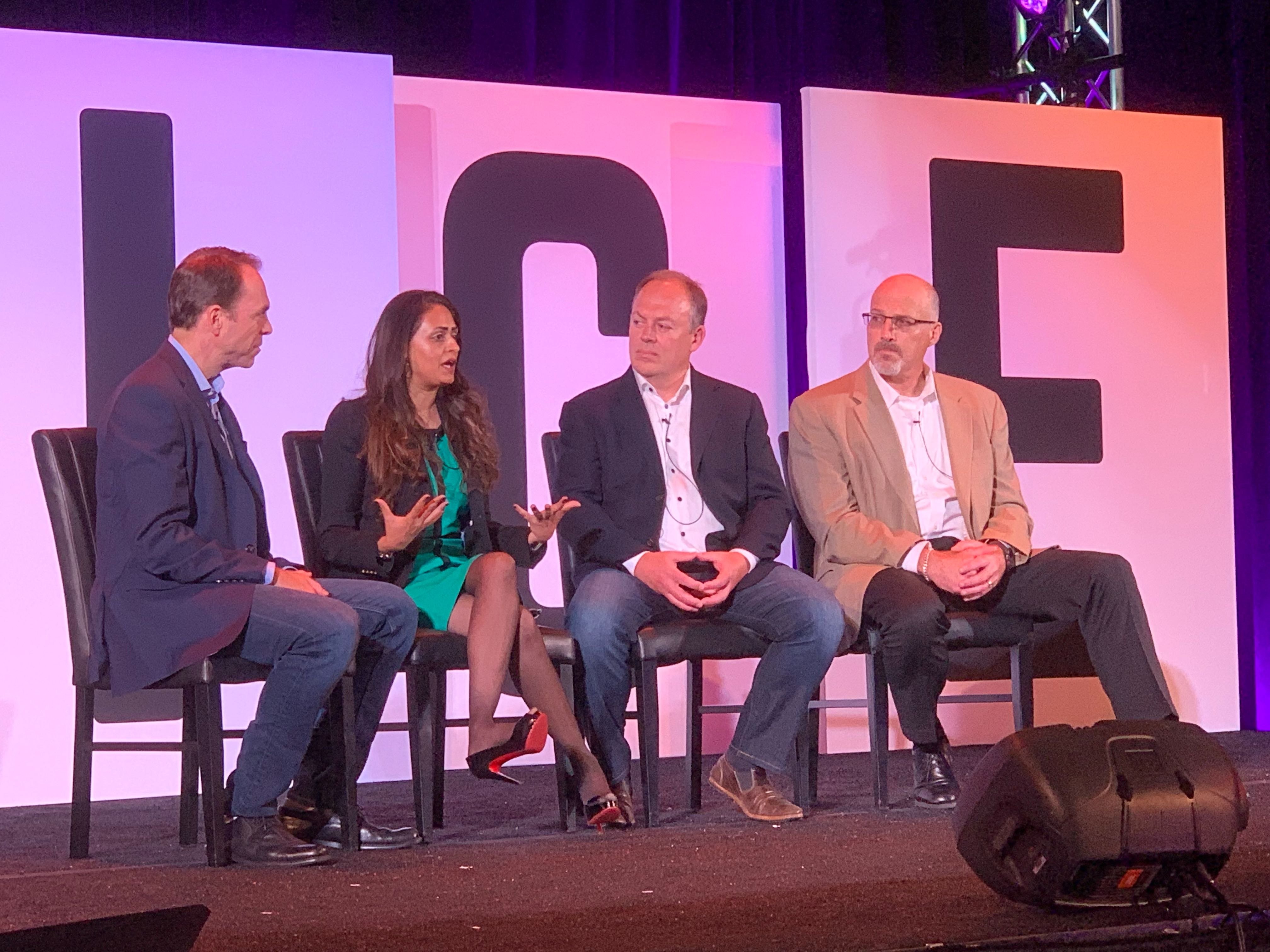 Keynote panel on Fintech and the race for Voice supremacy.

The conversation is fast-paced and full of compatible opinions.

"The future of commerce will be powered by AI," said Mark Jamison as his fellow panelists nodded in agreement. "The ones who are going to win are the ones who get to the market early."

Nearing the end of the panel, hands shoot up in the audience requesting a microphone to ask their question. Later, as the panel leaves the stage, Pete jumps up to introduce Christina Mallon, who has lost the use of her arms to ALS. Remarkably, she has lost none of her ambition in Voice. 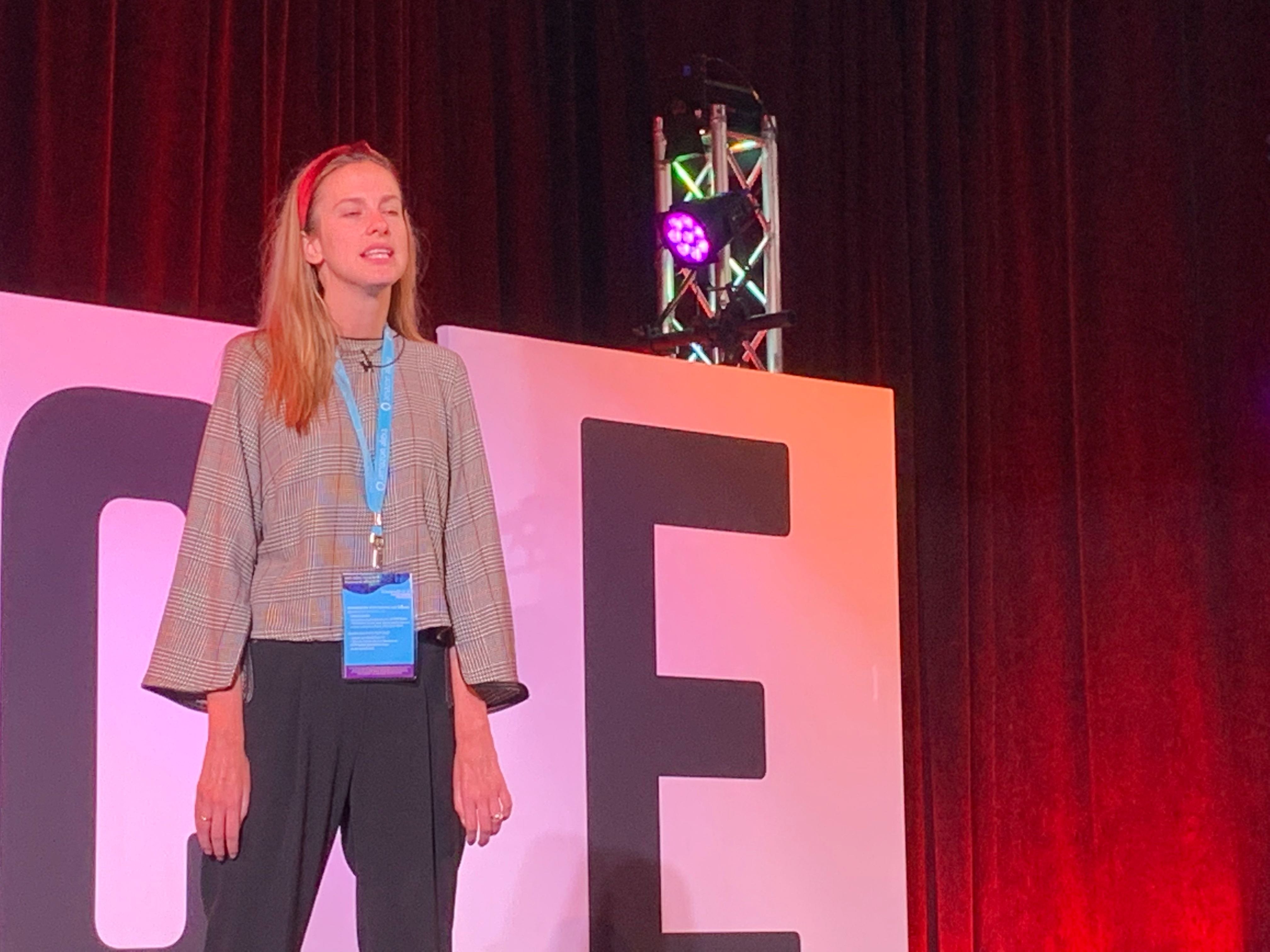 Christina Mallon during her talk on a voice-enabled fashion skill.

Christina Mallon begins by stating the importance of voice in the lives of people with different abilities.

She then delves into her presentation about the opportunity to make clothing adaptable and also make shopping inclusive using Voice. She presses a pedal on the floor, moving the screen onto the next slide featuring Open Style Lab—a group dedicated to empowering people through self-dressing and style.

As Christina is clapped off stage, Pete grabs the mic to introduce the students from Bruce Street School for the Deaf. Having learned from Day One at VOICE, the audience once again raise their hands in silent applause. Pete then introduces the panel on "Removing Barriers to Accessibility through Voice", as the school's interpreter signs away in the corner.

The panel take their seats on stage. A pair of sign language interpreters sit across them, one signing what Pete is saying, the other narrating what Noah Blankenship (from Prudential Financial) is signing. 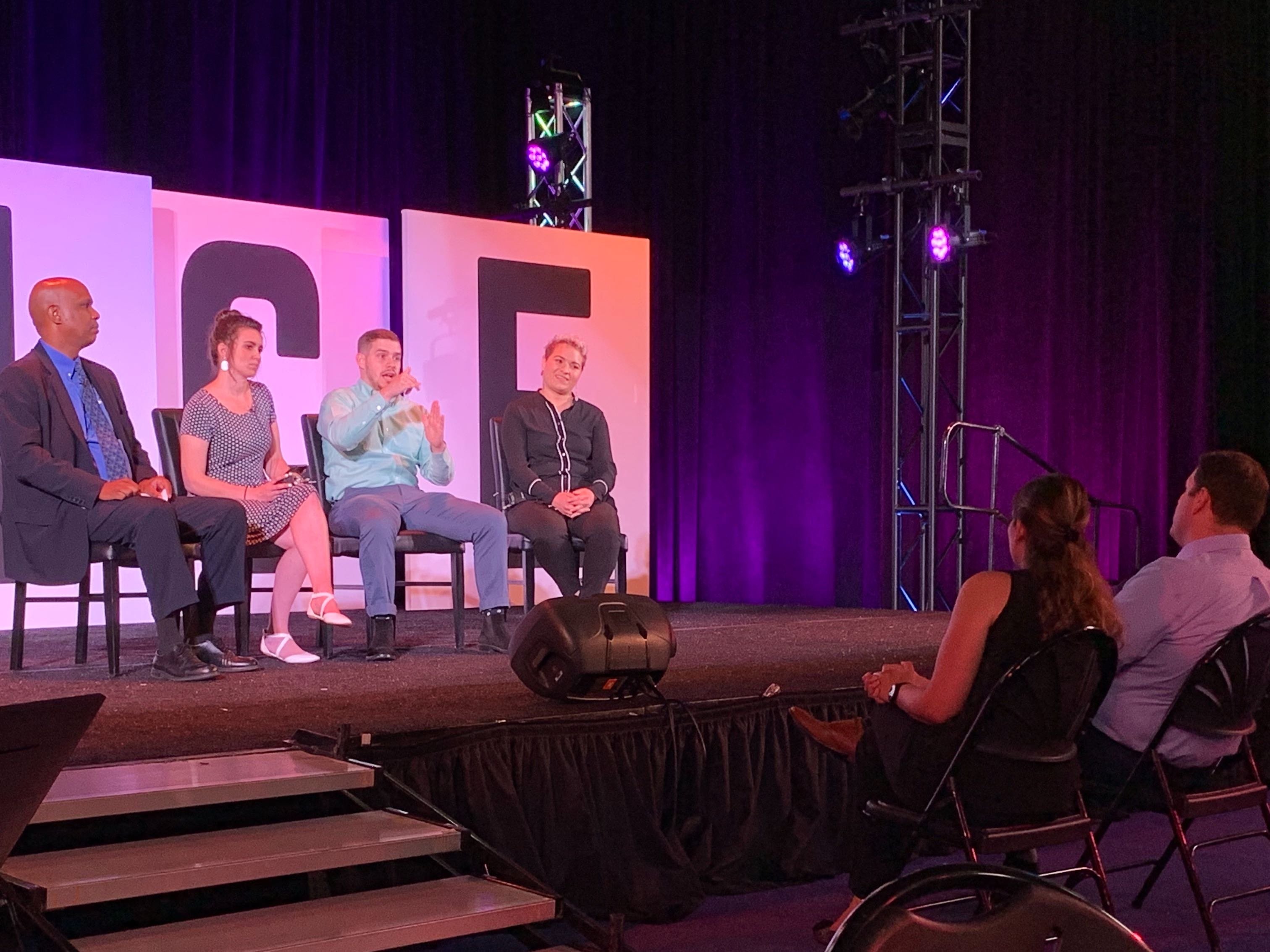 Noah Blankenship signing as his interpreter translates for the audience.

"We're happy everyone is now involved in the voice space. We got here first and we've been waiting," says Anil Lewis from the National Federation of the Blind, prompting an appreciative chuckle from the audience.

The conversation goes back and forth, always insightful and peppered with lighthearted comments from Anil. Noah shares his own experiences with technology as a deaf person and sharing how the growing interest in accessibility in tech has accelerated the use of accessible systems.

"Please continue to wander." He signs to the audience.

As their conversation slows to an end, Pete picks up the microphone and rushes to the back of the stadium to catch an attendee's question. He then bounces around (in today's choice of fireman-red pants) herding the students and panelists on-stage for a quick photo.

"I feel like I won the lottery," Pete says as everyone descends from the platform.

As the talks continue on the main stage, up on the EXPO flow the attendees are checking out any booths they may have missed and saying good bye to new friends. The pop-up shop is busy with eager attendees hoping to find the second golden ticket. Cathy Pearl is pensively twirling a black VOICE shirt around, trying to decide between the black and the blue version.

Within the EXPO demo hall, students are swarming various booths. A gaggle of them surround an organizer, fascinated by his hover board. Their eyes remain fixed on its blue glow as he steps on and glides away.

Over at Aider, the booth is busy as attendees are curious to know more about the Kiwi startup that just recently launched in North America.

Fellow founder Brendan Roberts is a few steps away, deep in conversation with an attendee. On the opposite end of the hall, the livestream stage is drawing a crowd as Vittorio Banfi from Botsociety gives a presentation on conversational design. A couple attendees occasionally pull away to refill their cups at the nearby pitchers of chilled water.

The Amazon Alexa smart home is busy as usual, with some attendees deciding to settle in the kitchen to work on their laptops. On the way out of the EXPO demo hall, Daniel Hill is ready for his upcoming panel on Microcrasting vs. Podcasting later in the afternoon.

"It's been amazing to take all those online relationships and transform them into real-life friendships." He says. Daniel adds that he planned a dinner with the monthly listeners of his Alexa Flash Briefing to finally connect in person.

Over at the pop-up shop, Ms. Parris Brown from Audible is the lucky winner of the second golden ticket. 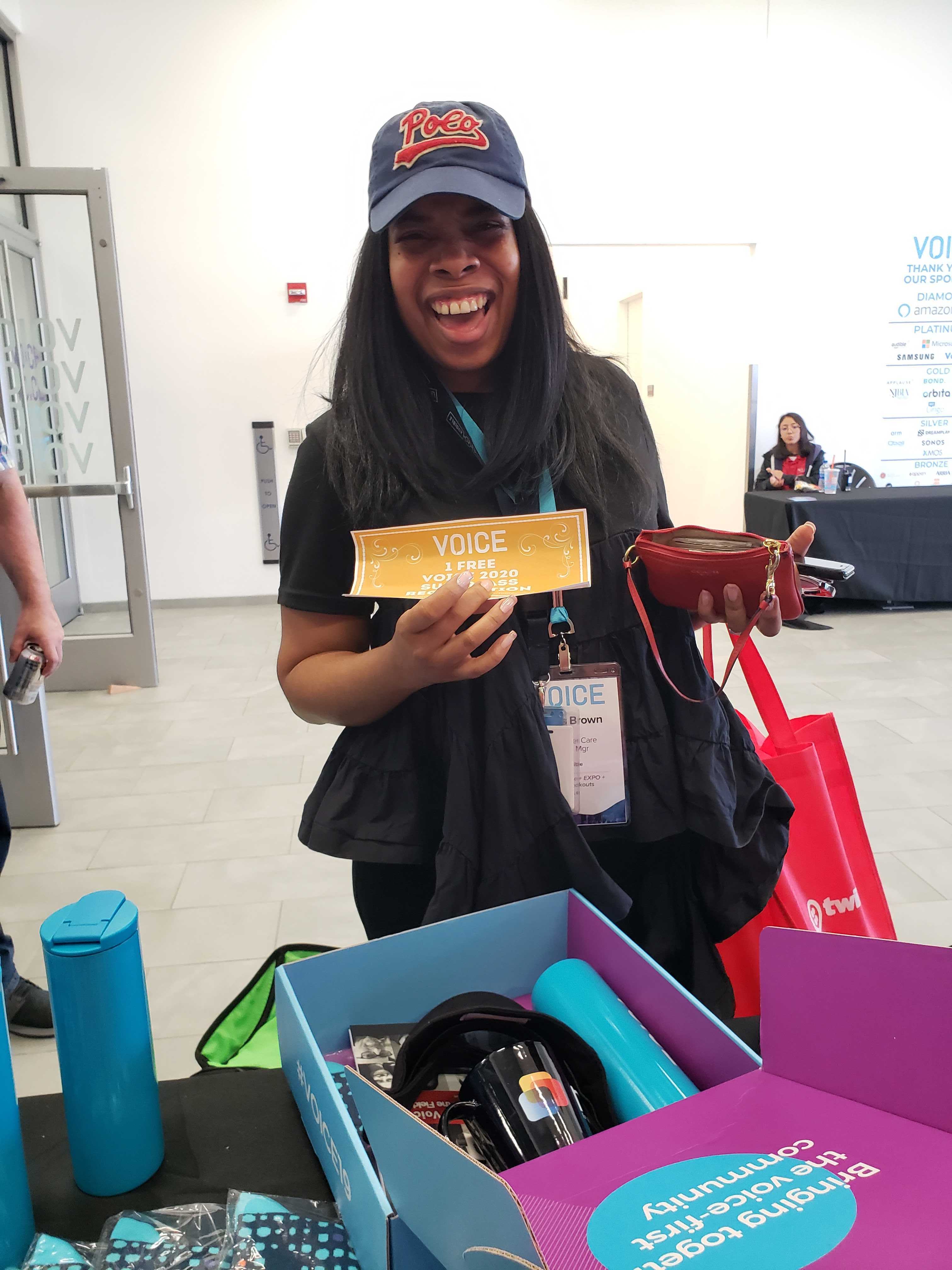 It's the last day at VOICE but the excitement is as high as it was on Day One. Over at Campus Center, the Amazon and VaynerMedia workshop on Alexa Skills Training is absolutely packed. Every table has extra chairs squeezed in and late attendees are standing in any available space to take photos of the slides.

With noon rolling in, attendees slowly begin to disperse, making their way to the food trucks waiting outside. There's a full afternoon ahead of innovative voice experiences, a deep dive into accessibility, and a string of prizes before the very last keynote of VOICE 2019.

Pre-register for VOICE 2020 and be the first in line for early-bird discounts. Don't miss out!