Day Two: A Golden Ticket and The Alexa Cup

The afternoon starts with a winner. At the pop-up shop on the EXPO floor, Mystery Boxes filled with "VOICE swag" have been flying off the shelves. One box, hidden in the pile, contains nothing but a single golden ticket.

With only two mystery boxes remaining, Sein Woo—a senior UX designer from Sonos—takes her chances. An organizer stands with her camera at the ready as Sein slowly pries open the box.

A few attendees around her look disappointed, losing interest in purchasing the remaining mystery box. (Spoiler alert: we have more on the way!)

Around the NJIT campus, the early hours of the afternoon are packed with simultaneous sessions, panels, and workshops. From case studies given by Mercedes and Samsung Bixby to panels on conversational design in healthcare—even a live interview with David Isbitski. No industry will be left unturned this afternoon.

Buried in the Kupfrian Hall, the Amazon Alexa team is leading a three-hour workshop on building Alexa games. In the next building, a talk on how to develop for Samsung Bixby is being led by Senior Viv Labs Evangelist, Roger Kibbe. Every table is full but attendees are still trickling inside, wistfully looking around before settling on an unofficial table at the back to take notes. The room is silent as every iota of attention is on Kibbe. 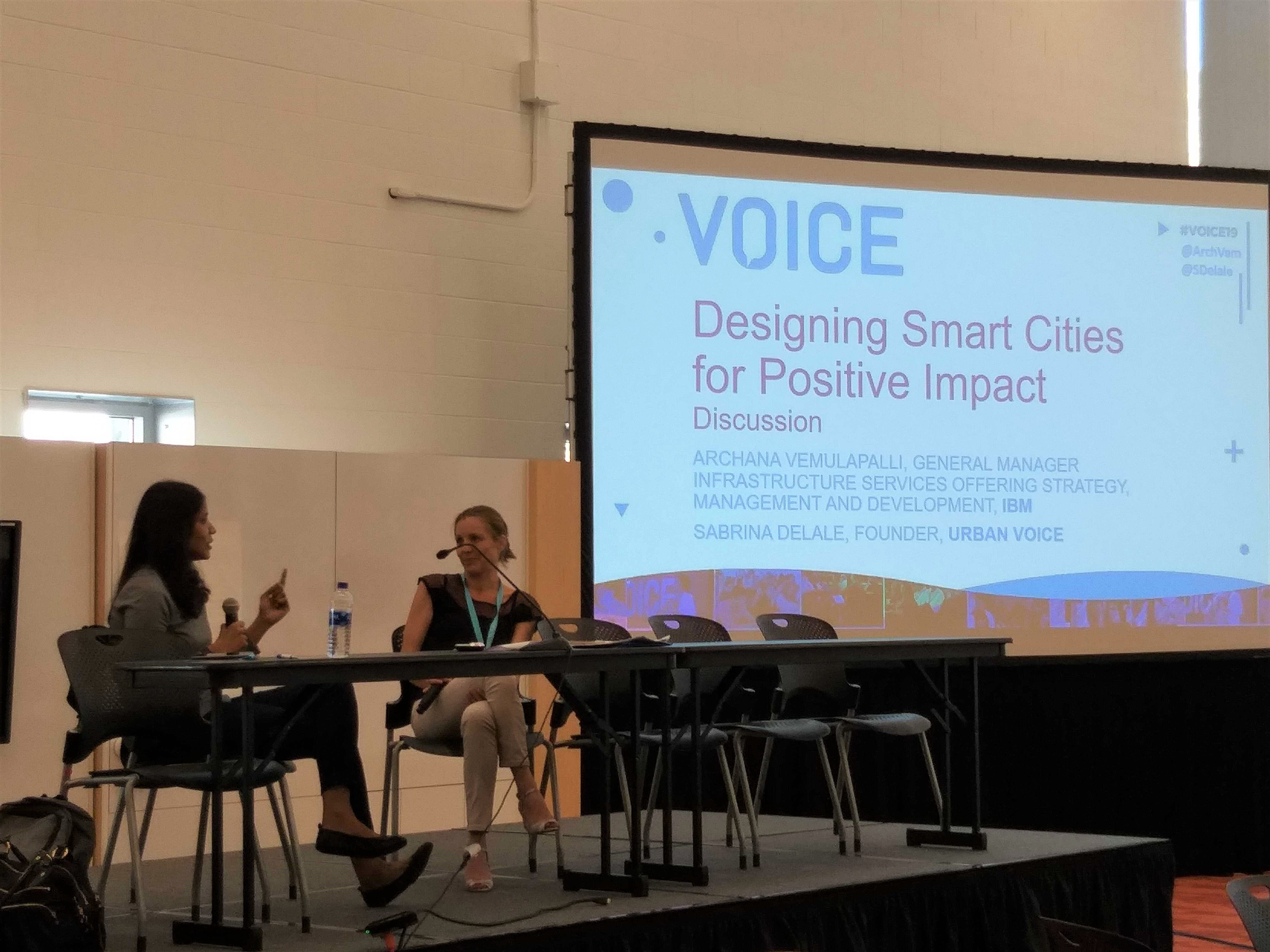 Back in the central campus building, Ballroom A is in the midst of a panel featuring a fun mix of voice artists. They talk and joke around as they give "sound advice" on sonic branding. A handful of late attendees stand in the back, not wanting to interrupt the ongoing session with the noise of chairs being drawn. A few rooms over, Mark Greenfield (a self-proclaimed "accessibility cop") is answering questions from his tight-knit audience on accessibility on a college campus in the voice-first era.

Dozens of sessions are happening around campus at any given time, but again, don't worry if you missed them (or aren't here to attend); slide decks and recorded sessions will be available on the VOICE Summit website soon.

On the Exhibitors floor, the pace has slowed down as the afternoon rolls on. Attendees are on their phones as they roam the area, occasionally chatting with exhibitors they've become friendly with. But more than a few booths are still receiving some well-deserved attention. 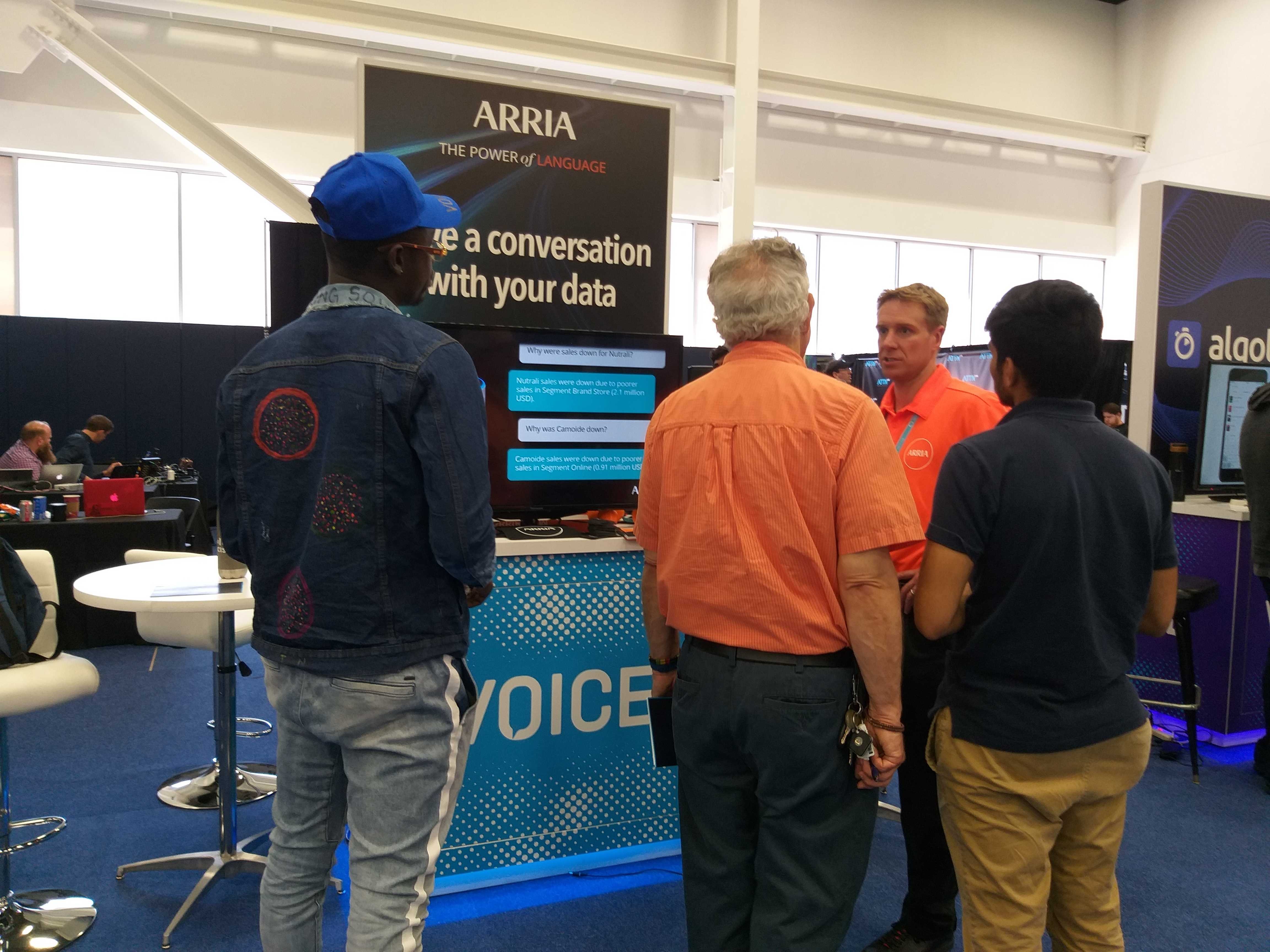 ARRIA booth on the EXPO floor.

As the evening creeps in, attendees begin to feel the weight of a long, fulfilling day. A group flaunting official VOICE shirts from the pop-up shop shuffle towards a table currently being prepped with wine bottles and glasses for the 5 PM happy hour.

Nevertheless, James Nitsch from WillowTree is just as cheerful as he was this morning, describing his time at VOICE as wildly productive. "We've had a lot of good people stopping by the booth. We've been to a couple of the talks by Amazon and we've learned a lot!"

Nearing the EXPO demo exit, the Women in Voice table is finally free after a continuous flow of largely female students and attendees brimming with questions about the non-profit initiative.

The women switch shifts with the next pair of volunteers.

"It's so unique to be with people from all over the world. It's magic." Says Blandine Avot, whose full time job is with Dashbot. "People have been coming by leaving their business cards," chimes in Danielle Brantley, a student settling down next to her to help at the booth. Blandine thoughtfully comments on the overall Summit:

"Coming from a mostly male-dominated industry, I'd say VOICE is pretty diverse and people here are very aware of the importance of inclusivity. They know Voice will work better with diversity." - Blandine Avot, Women in Voice.

Brantley nods in agreement as Blandine goes on to describe the "family-like feel" at VOICE that she has never felt in other—typically impersonal—tech events. She adds to her point saying she met with a group of fellow French voice aficionados for breakfast this morning and had an all-female luncheon the day before. "No matter who you meet, you have something in common," she concludes with a warm smile.

Blandine then swerves from her line of thought to acknowledge the fabulously funky style of her company's Co-Founder and CEO, Arte Merritt (who, by the way, is wearing a pink and purple flower-patterned shirt today). The two women then turn their attention to the wine-laden table as happy hour is set to kick off soon.

Meanwhile, in the Kuprian Hall, the 2019 Global Alexa Cup is just about to begin. Matthew Cadman from Amazon Alexa is explaining the criteria for entering the competition, following it up with a photo gallery showcasing competitors representing almost a dozen countries. He then introduces the judges, hailing from Rain Agency, Mobiquity, Mastercard, Adobe, and of course, Amazon Alexa.

It's time for the presentations. Each team gets ten minutes to pitch their project, then must face pointed questions from the judges. The first team, Publicis Commerce, quickly explains the strategy behind Talk2Me Barbie, an Alexa skill designed alongside Mattel to encourage young girls to "play out their dreams" and interact with their favorite pink personality.

Next up, Clemenger BBDO from Australia graces the stage. While four teammates stand idly on the far end, two step in front to explain their Alexa skill called Inner Voice, which tracks and gently manages your anxiety.

"You seem stressed today. Let's try some breathing strategies. Follow my voice: breathe in for 1...2...3...4." Says Alexa during the Inner Voice demo.

Finally, London-based team, Say It Now, climbs on-stage to present the last Alexa skill of the competition: bookitnow. This Skill focuses on letting people book whatever service they need, from an emergency plumber to a cruise around New York.

After the last team successfully answered the judges questions, Matthew re-takes the stage to announce that the judges will be deliberating while the rest of the attendees are welcome to join the upcoming party—the first ever VOICE Summit Awards.

Want to be at next year's VOICE Summit in person? You can already pre-register or stay in the loop for updates if you're not ready to buy. Sign up for VOICE 2020 today.