LG Made An Airport Guide Robot and It's Going Places (Literally) 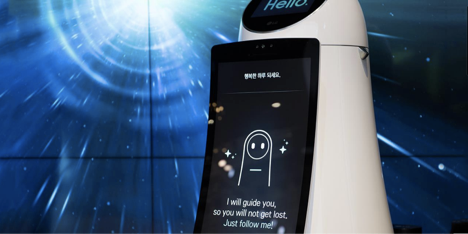 Ever been lost at an airport?

Many of us sure have. (If you haven’t, please tell us your secrets.) It’s no fun trying to find your departure gate or desperately searching for an information desk to ask about your connecting flight, especially in a foreign country. Luckily for those passing through South Korea’s largest and busiest airport, LG has a bot for that.

Troika looks like a high-tech, non-threatening version of a Dalek. It has a shiny body and a touchscreen face where two bright dots for eyes smile and blink in delight. It also has another, larger screen attached to its front to display information. Troika likes to cruise around the airport, can respond to its name, and is always eager to help.

Some people may look at it and think, “Okay, so it’s a kiosk that is never where you think it’ll be.” But this Airport Guide Robot is so much more than just an information kiosk on wheels. Here’s a quick rundown.

Troika uses LG’s voice recognition platform to listen for questions in four languages: English, Korean, Chinese, and Japanese. Using Natural Language Processing, it’s able to understand what the user is asking and then give the appropriate verbal response. This is especially useful for tourists who may not know the local language.

While Troika’s voice and tone still sounds very robotic, it does the job of understanding questions like, “Where is the boarding gate to San Francisco?” and, “Can you tell me where the bathrooms are?” As the robot is connected to the airport’s central server, it can pull up that kind of information on the screen in no time.

Right above the large screen, there’s a slot where a user can insert their boarding pass. Troika then scans it and shows their flight information on the screen. It'll also include useful details like boarding time, gate location, and how long it’ll take to get there.

Troika then politely asks, “Would you like an escort?” If the user says yes, it's head turns while saying, “Please follow me closely,” and glides away. The robot’s pace is rather slow, which isn't the speed you'd want when you're late for a connecting flight, but it’s the thought that counts.

Go wherever it's needed

Troika knows exactly where it is within the airport and easily moves around people and objects. It can also calculate the best route to take when guiding users to a specific location. It’s like Google Maps, but in a giant Roomba.

When Troika isn't leading a lost traveler to their departure gate, its usually roaming around in search of someone to help. So far, this helpful bot has piqued the interest of many passersby, but LG’s engineers are still in the process of tweaking it.

LG has big plans for AI

This Airport Guide Robot is just one of the commercial robots LG has released since 2017. After they announced DeepThinQ, their in-house AI Technology, LG has taken a huge interest in developing both smart home robots and public service robots. So we can expect to see more Troika’s wandering around our airports, hotels, and banks in the near future.

“LG is dedicated to the advancement and development of its robot technologies which includes navigation, voice recognition, natural language processing, and of course, DeepThinQ,” says Song Dae-Hyun, President of LG Electronics in a press release.

If you find all this AI tech and talk fascinating, you’re going to love the VOICE Summit coming up this July. There will be speakers, workshops, robots, and thousands of like-minded people to network with. Register here to get in on the fun, and while you’re at it, follow VOICE on Twitter here. We’ll keep you updated on who's going and what's happening.