How Small Businesses & Influencers can Monetize with Voice 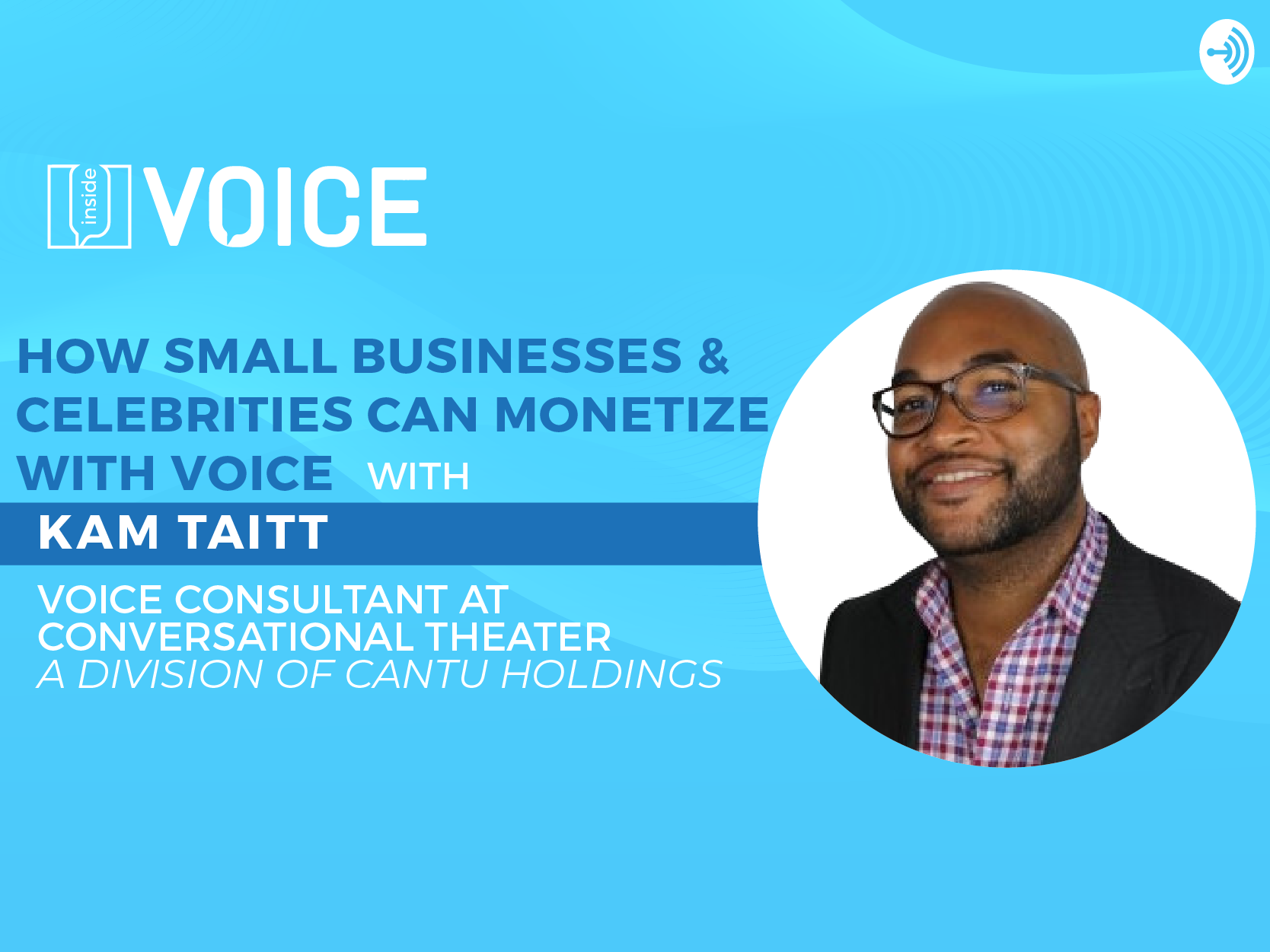 It's that time again where we pick a popular episode from our Inside VOICE podcast and filter the best parts into an equally interesting read. This time we combed through Kam Taitt's ep, which is all about helping businesses and people automate the tedious and reign in extra income through Voice.

Here's what you need to know.

Small businesses and outsourcing to Voice

As a Voice consultant at Conversational Theater—a division of Cantu Holdings, Kam Taitt has worked with everything from boutiques and wineries to everyone including athletes and celebrities. But it was during his time in the insurance sector that he picked up a very useful phrase:

"What you don't do, you outsource."

This is the stance he takes when consulting with many small businesses, but instead of battling with a cluster of graduates in some far-flung corner of the world, he helps them outsource their most pressing (and repetitive) tasks to voice technology.

"Solutions through Alexa help automate their business and create better customer experiences," Kam tells Keri Roberts on the podcast. He goes on to support this line with a real client case—a Yoga studio in Pittsburgh.

Gina, the studio owner, told Kam all about her woeful appointment scheduling system on her website. It was a real hassle for clients who wanted to re-schedule an appointment, and the darn thing never updated Gina about the modifications until it was too late. So, Kam asked "why not leverage voice technology to help make things easier and automate it for your clients?"

After building an Alexa skill that tapped into Gina's scheduling system, clients were finally able to re-schedule and even get session updates or a heads-up if their yoga subscription was running out.

"It's gotten a strong response from her clients," says Kam. "It has really increased business for her."

Continuing with the Yoga studio case, Kam explains that monetizing Gina's new Voice skill happened from various angles. For one, she was no longer losing money from missed appointments or dried up subscriptions. Plus, Kam included in-skill purchasing so clients could discover Gina's new line of Yoga merchandise and order it on the spot using Amazon Pay.

At this point, Keri emphasizes that Alexa skills like Gina's prove that it doesn't take a herculean effort to bring Voice to a small business. It's really all about solving a specific problem, or re-purposing information you already have online.

Now, let's step away from the yoga studio and delve into Kam's other major passion: helping celebrities and professional athletes control their narrative through their personal channel.

Kam shares how it all started when he worked in the political realm and watched political campaigns run through social media for a personalized platform to share their views. Then, when Voice came along, he eyed it as another opportunity for celebrities and other high-level influencers to speak directly to the public.

"It's an unprecedented type of access to celebrities," he says, which, as we know, is pretty much what every fan is hungry for. Kam mentions the Food Network's upcoming Alexa service that people can subscribe to and follow cooking lessons by chefs like Bobby Flay. It will even feature live classes and accept questions from eager cooks at home. He also throws in the potential of athletes having their own Alexa skill where they can show their more personal side, talk about their upcoming game, or promote their other passions.

"When people are engaged with Alexa, they're open to learning about what's going on with you,' Kam explains.

How to get started

On behalf of anyone who wants to start monetizing their brand with Voice, Keri asks Kam for some "actionable tips" to help them get rolling. Here's what he had to say:

"Don't reinvent the wheel," is the first thing out of Kam's mouth. He recommends that you start by looking at what you post the most on Twitter or on your website, then "voice-ify" it. He also points out that whatever information you have to give out regularly can be done more efficiently through Voice.

So basically, look at what you already have and what the public wants to know more about.

Kam also says that it doesn't have to be an Alexa skill per say, it could just be a daily flash briefing (which you can quickly learn how to do here), where you talk about the things people ask you about the most, or simply the topics that interest you. Professional baseball player Mike Trout, for example, could give his thoughts on an upcoming game. Or NBA player PJ Tucker could partner with a sneaker store so die-hard fans can tune in and buy the same model sneaker PJ is wearing that day. Your creativity is the limit.

At this point, Kam likens Amazon Alexa to a campfire, where people love to gather around and listen to a good story. He says that stories inspire people to learn, to be entertained, and to listen. This instinctive human attitude to stories is why Alexa is such a powerful force for brands, businesses, and people alike.

"It's all about trying to bring people to the campfire, so to speak, and craft that voice experience."

Listen to the podcast

To hear more golden nuggets from Kam about monetizing Voice, and the two Alexa skills that he thinks handle monetization brilliantly, listen to Kam Taitt's episode on Inside VOICE.

To further your plan of monetizing Voice for your brand, join us at VOICE 2020 where people who have done it all before will be there to teach you the ropes. Granted, there's still a while to wait before then, so in the meantime, check out our other upcoming events like VOICE @ CES and the easily-streamed VOICE Global! There's plenty to choose from and lots of chances to learn from the best in the industry. Take your pick.